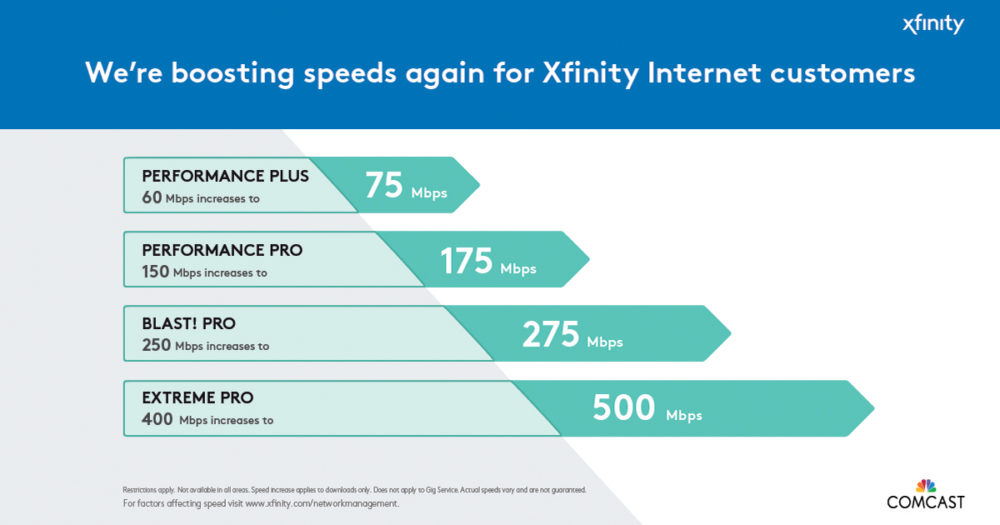 Comcast announced they are increasing download speeds for some of its most popular Xfinity Internet packages for customers in California.  Beginning today, download speeds for the company’s Performance tier will jump from 60 Mbps to 75 Mbps, while the Performance Pro tier will increase from 150 Mbps to 175 Mbps.  The Blast! tier will move from 250 Mbps to 275 Mbps, and the Extreme tier will be upgraded from 400 Mbps to 500 Mbps.  About 85 percent of Comcast’s Internet customers subscribe to one of these tiers and will have their download speeds upgraded, and whether they purchase Xfinity Internet on a stand-alone basis or as part of a package.

Last year, Comcast boosted download speeds for Blast! and Extreme customers in California.  Today’s speed increases are just the latest in a series of moves by Comcast to support growing consumer demand for super-fast, high-capacity Internet connections that can not only handle the explosion of connected devices that are powering the smart home, but also offer a single platform to manage and protect them.

“To keep up with today’s constantly evolving technologies, modern homes require fast Internet, wall-to-wall Wi-Fi, and a way to manage the connectivity needs of the entire household,” said John Gauder, Regional Vice President for Comcast California. “With xFi, we’re giving our Internet customers the tools to manage the ever-growing number of connected devices, apps and technologies in their homes.”

Xfinity xFi is Comcast’s differentiated Internet experience, which gives customers more speed, the best in-home Wi-Fi coverage, and easy to use controls over their home Wi-Fi networks. With xFi, customers also can manage their children’s screen time and pause Internet access, as well as protect all their IoT and home automation devices from unwelcome security threats. xFi customers receive powerful all-in-one modems and Wi-Fi routers, that, when combined with xFi pods, can extend Wi-Fi coverage too hard to reach rooms of virtually any home. Additionally, xFi customers receive complimentary access to the nation’s largest network of WiFi hotspots and five lines of Xfinity Mobile service to extend their Internet experience outside of the home.

Nationally, over the past four years and across Comcast’s service area, the company has quadrupled its overall network capacity and doubled its fiber miles, deployed gigabit speeds to more homes than any other Internet Service Provider, upgraded all of its speed tiers, and rolled out an entirely new class of gateways – the xFi Gateway and the xFi Advanced Gateway – that are designed for higher speeds and blanket most homes with great Wi-Fi coverage.

Over the next several weeks, customers who lease a gateway will automatically receive the new speeds without having to reset their modems.  Other customers who purchased their own modems should check online to see if they need a new device that is capable of handling these faster speeds (http://mydeviceinfo.comcast.net/). 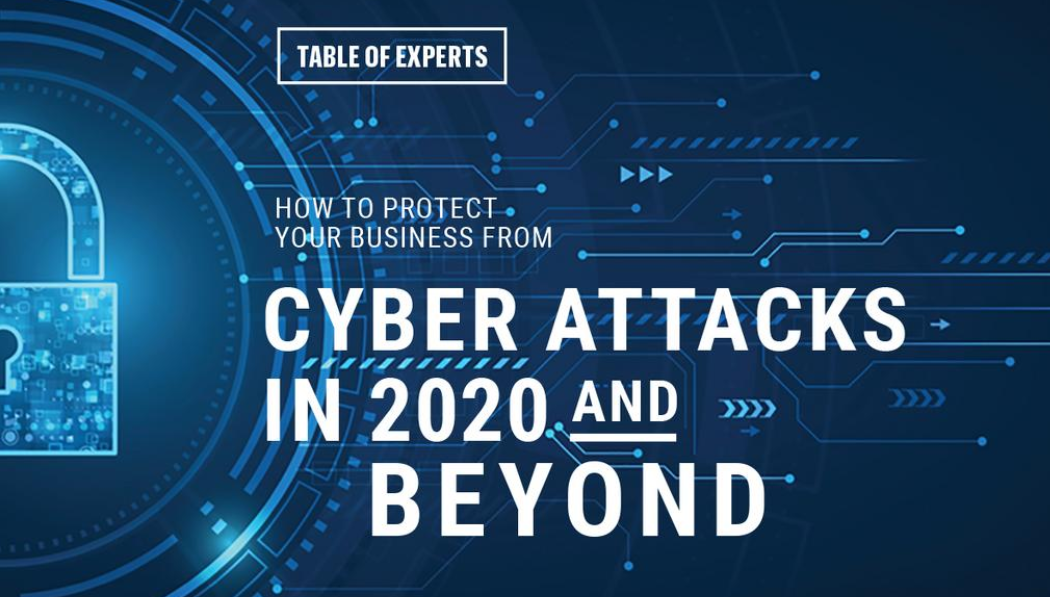 In March 2020 millions of employees in the United States and the world were mobilized to work from home. Technology in 2020 allows for seamless collaboration through the internet, but is your network at home safe? Organized by the San Francisco Business Times and Silicon Valley Business Journal, a table of experts gathered Cybersecurity professionals […] 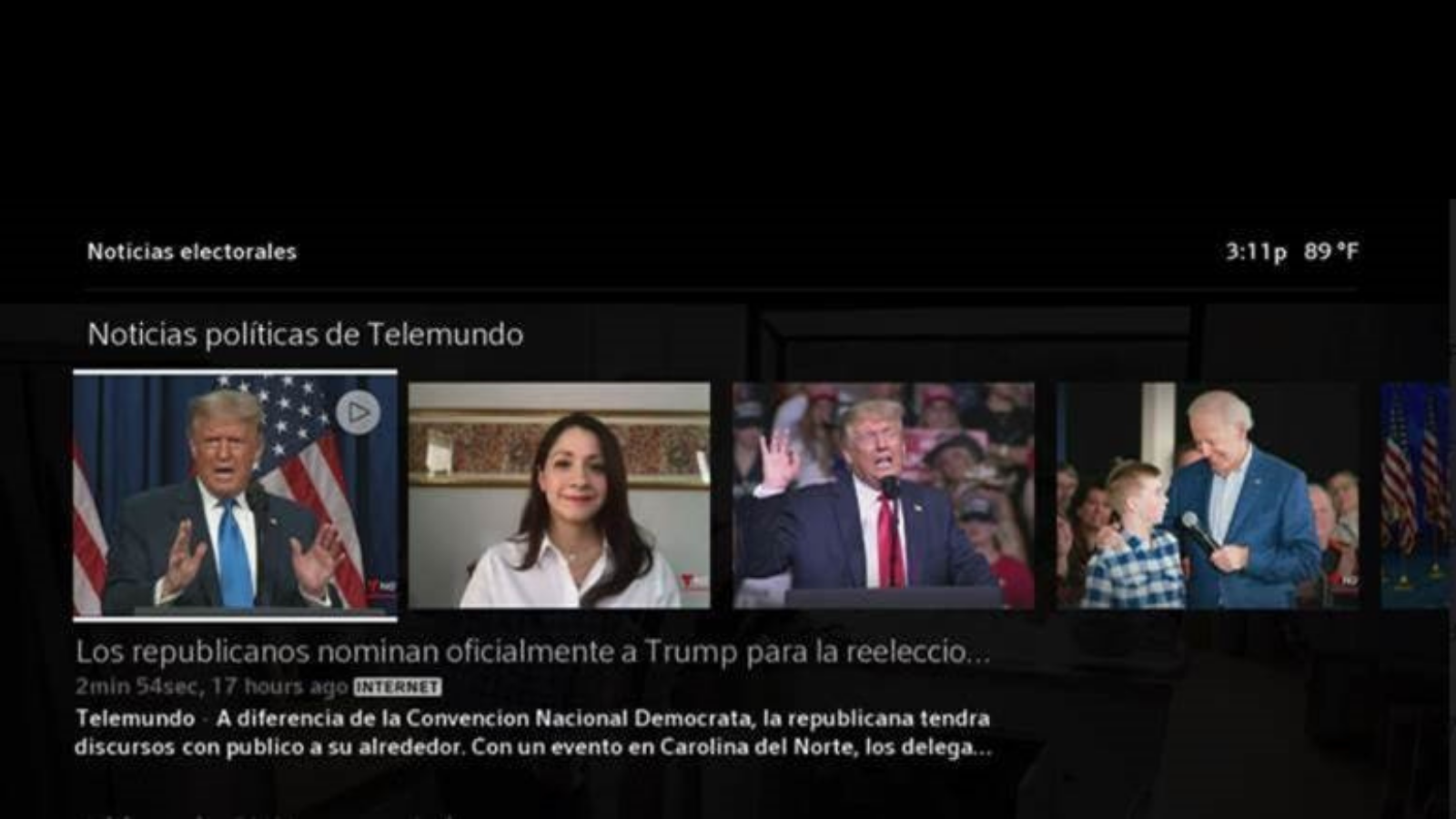