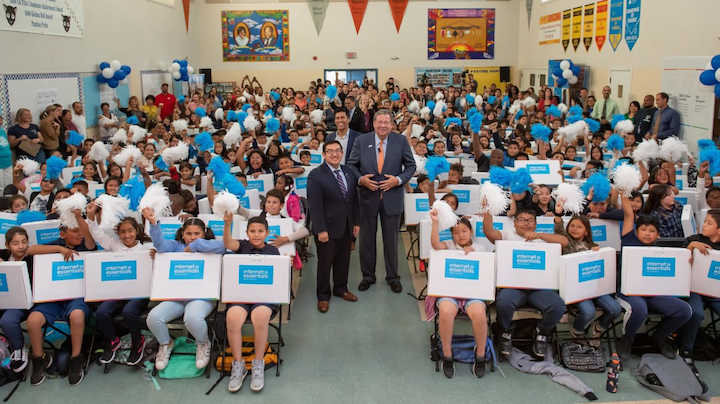 On what appeared to be a normal Thursday in early October, 300+ Sacramentans’ lives were about to change for the better.

In our lives, there are good days, bad days and amazing days. That fall Thursday in October was an awesome day because we at Comcast got to watch the utter delight spread across the faces of more than 300 low-income seniors and students as they received a free laptop and six months of free Internet Essentials service.

But what’s a laptop? Pieces of hardware, chips, and wires? And what’s the Internet? A “thing of magic” that floats in the air, unseen, and yet connecting us all?

Well, in this case, a laptop and an Internet connection represent the possibility of a better future. It means applying for a higher-paying job. Or completing homework at home as opposed to at a library – or at a fast food restaurant that offers free WiFi. It’s the chance to use a larger screen instead of a phone to write a term paper. It means being able to video chat with grandkids that you haven’t seen in months because they live in another city or country. It means creating a website for your small business and so much more. It’s an opportunity, a chance.

The day started with a Comcast employee appreciation breakfast at our Sacramento office. Here, 12 Comcast employees were recognized as Internet Essential ambassadors. These folks go above and beyond, making sure that people in their communities know how to obtain access to affordable Internet service at home. These employees choose to uplift the underserved, enrich their communities and help those in need. To recognize and celebrate these folks, U.S. Paralympic Gold Medalist and Purple Heart Recipient Rico Roman joined Cohen in placing a symbolic “IE Ambassador gold medal” around each person’s neck.

Then, at La Familia Counseling Center, a community center in the Maple neighborhood that serves seniors, mostly of Latino descent, members gathered around tables playing Loteria, a Spanish bingo game, and eating Mexican bread. Cohen, flanked by Sacramento Mayor Darrell Steinberg, took the stage to announce that Comcast would provide a $50,000 grant for La Familia to build and create an intergenerational digital literacy program.

Through the program, participating youth, ages 15-20, will be trained to provide digital literacy education to seniors.  The program will empower the youth with leadership abilities, training experience and other valuable skills, as well as enable them to build relationships with seniors.  Participating seniors will gain valuable digital literacy skills, while forming new friendships, helping to keep them engaged, vibrant, and socially connected. Cohen wrapped up the event by announcing that in honor of the Internet Essentials program, everyone in the room would receive a free laptop and six months of free Internet Essentials service…which was met with thrilled applause.

Seniors shared how their new computer and Internet service were going to change their lives, their relationships with loved ones, their knowledge of the world around them, and so much more. “I want to learn how to use it so I can communicate with my grandchildren,” said Maria Landeros, a woman who attended with her husband.

For Gloria Torres, Outreach and Education Coordinator at La Familia, this represents more than just a piece of equipment. “I think the most beautiful thing that happened is that a seed was planted. Comcast planted a seed, and these are the flowers that are going to grow from that.”

The third and final stop that day was at Earl Warren Elementary School. Students began to fill the gymnasium and quickly started shaking the blue and white pom-poms placed on their chairs, despite not knowing exactly what the event had in store for them. After Cohen, along with Vice Mayor Eric Guerra, told the group of students, parents, faculty and staff about the Internet Essentials low-cost Internet program, he revealed that every student in the room would be the proud new owner of a laptop and have six months of free Internet Essentials service. The screams and cheers that came within seconds were deafening as the fourth, fifth and sixth graders, plus special education students, shared their overwhelming excitement.

It was indeed an AWESOME day!